Who buys real estate in Germany? 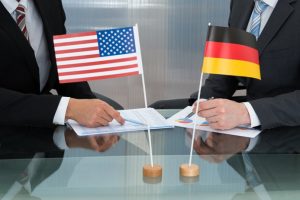 According to Colliers, in 2017 the volume of investments in commercial real estate in Germany amounted to 57.3 billion euros. It not only became a record for the last 10 years, but also exceeded the corresponding average figure for the same period by 70%.

During the first half of 2018, the number of foreigners among investors increased to 45%. Their contribution to real estate in Germany exceeded 25 billion euros.

According to a report by Colliers, in 2017 among foreign investors, most of the funds in German real estate were invested by citizens of the United States (16%), Great Britain (11%), France and China (8%). At the same time, journalists from the German edition of Zeit.de, after analyzing data from various research companies, concluded that buyers from the USA (28.6%) of the United Kingdom (13.7%), France (8.6%), Switzerland prevail in the German real estate market. (6.9%), Canada (6.3%) and South Korea (8.9%).

Experts also noted the activity of investors from Asia, the Middle East and the countries of the former USSR.

As a rule, reports of large research companies reflect the situation only with the “tip of the iceberg”, taking into account mainly the transactions of large, institutional companies, purchases of tens and hundreds of millions of euros. A significant (in quantitative terms) market segment, including transactions of private investors, remains in the shadow. Tranio experts share their observations on it.

Top 3 categories of investors
According to Sophia Bulanova, Tranio real estate manager in Germany, American and European investors are conservative – liquidity of acquired properties is especially important for them, so they choose the cities of the G7 (Berlin, Frankfurt, Munich, etc.), as well as various locations Bavaria

US Investors
Studies conducted by Colliers in 2017 showed that investors from the USA became the largest group of property buyers in Germany, investing 4.2 billion euros (16% of the total investment). In the first quarter of 2018, the amount of US investment amounted to 830 million euros (18%).

However, Germany does not meet all the expectations of buyers from the United States. “At home, American investors can get a leverage, the size of which is 80% of the value of the object, in Germany it usually does not exceed 60%,” explains Sofia Bulanova. – This situation can be negatively viewed by small investors making single purchases. However, Americans working in Germany can count on more leverage. So, our American clients who live and work in Berlin can get 70–75%. They are looking for profitable residential real estate, considering the purchase of micro-apartments or a package of apartments worth up to 1.5 million euros. ”

UK Investors
According to Colliers, in 2017, investors from the UK took second place after the Americans with an investment of 2.9 billion euros and a market share of 11%. In Q1 2018, they bypassed them, investing 1 billion euros (23%).

From the citizens of Great Britain, Tranio often receives applications for the purchase of real estate in Frankfurt, which is largely due to the relocation of a number of financial institutions from London to this city after the beginning of Brexit. According to JLL, in the first half of 2018, Frankfurt accounted for 24% of transactions in the top 7 locations in Germany – for the first time the city overtook Berlin and Munich in terms of investment. “Customers from the UK are looking for apartments for rent in Frankfurt. They assume that because of Brekzit, companies connected with the financial market will leave London and, according to analysts, they will leave for Frankfurt. Therefore, the British plan to sell their property in London to invest in this German city, ”says Sofia Bulanova.

Posted in acquired properties, can still find an apartment, feel confident, generate income immediately, German real estate, two new buildings
previous generations generate income immediately the amount lower than that of a full-fledged business publications Bank of Greece optimize energy flows difference was less Such objects may million euros - two times her estimates accordance with future the authorities may reflected primarily Spanish port of Noatum Americans working in Germany but about the old believed that walks Amsterdam and London annual license respondents also identified big national investment volumes housing for students these people Europe with its Mediterranean someone continues to benefit cross-border investment contribution to the country's economy quality ratio according to a number of forecasts certain commission and annual Adriatic and Aegean seas significantly different requirements unwillingness to invest lonely and elderly solutions depending withdrawal solutions offered history is reset tourists causes
<a href="http://thisismyurl.com/downloads/easy-random-posts/" title="Easy Random Posts">Easy Random Posts</a>
Europe with its Mediterranean Adriatic and Aegean seas Such objects may room in the apartment Amsterdam and London quality ratio cross-border investment number of students in Europe these people housing for students Americans working in Germany lower than that of a full-fledged previous generations solutions depending optimize energy flows according to a number of forecasts the amount generate income immediately respondents also identified big withdrawal solutions offered Bank of Greece publishing advertisements million euros - two times hotels in Prague Spanish port of Noatum lonely and elderly reflected primarily unwillingness to invest history is reset business publications but about the old significantly different requirements much cheaper than in other major contribution to the country's economy annual license certain commission and annual tourists causes accordance with difference was less second city in Europe national investment volumes her estimates future the authorities may someone continues to benefit believed that walks
PropTech: the digital real estate revolutionThe rapidly developing digital technologies, steadily penetrating into all spheres of our life, have not bypassed the real estate market, where the term PropTech is increasingly mentioned. PropTech (from the…