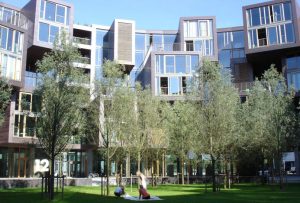 Universities are not able to provide all students with housing, private investors help to fill this gap
The globalization of higher education plays into the hands of investors. Student housing is becoming an increasingly attractive asset: over the past three years, the number of investors who evaluate investment prospects in this sector as “very good” has increased 2.5 times, according to Statista. A characteristic feature of this sector is the so-called acyclicity: the number of students can grow both in times of crisis and in times of economic upsurge. According to Savills, in 2016, housing investment for students broke the record, reaching 16.4 billion dollars. In a PwC survey conducted among 800 of the largest investors in Europe, 32% of respondents said they are considering investing in student housing in the near future. . Types and features of student housing Under the student housing understand real estate objects that are leased exclusively to students. There are different types of student housing: dormitories, communal apartments with shared bathrooms and kitchens or micro-apartment complexes. Such housing belongs to non-educational operators and is located outside the university, but in close proximity to them.

Copenhagen Hostel
Hostel in Copenhagen Jens Cederskjold / Wikimedia
By the type of services offered, they distinguish complexes operating on a hotel basis, and classic apartments with minimal service or without it at all. For example, in the first case, the price includes cleaning, linen change and breakfast. The complexes of student micro-apartments consist of several furnished apartments of up to 35 m².

On the territory of student complexes, residents can offer laundry services, a fitness center, access to a swimming pool and a common recreation area, for example, with a roof garden. In addition, the owners and operators of such housing in order to attract students are ready to offer rental benefits, various discounts and bonuses, for example, free iPads for use in common areas.

Key markets
The largest market for student housing in the world is the United States. Two years ago, there were 20.3 million students in this country, of which 5% came into the country from abroad. According to Savills, the monthly cost of renting student housing in the United States ranges from $ 200 to 2.2 thousand, and the total investment in this sector in 2016 reached $ 9.8 billion. Rental income, which the investor can expect, is on average 5.9%.

In Europe, the leading positions belong to Germany, France, Great Britain and the Netherlands. In Germany, in the period 2016–2017, there were the largest number of students in Europe: almost 2.8 million people, 12% of whom are foreigners. Private investments in the German student housing market in 2016 amounted to 750 million euros, the volume of investments in 2017, according to preliminary estimates, exceeded 1 billion euros. The cost of renting student housing in this country starts from 200 euros and can reach 850 euros per month. According to Savills, the rental yield of student housing in Germany is on average 4%, which is slightly higher than the average rate of return of ordinary apartments at 3%.

Micro-apartments – housing not only for students
Unlike ordinary apartments, which can be rented at any time of the year, student housing in small towns is characterized by seasonality of demand. Traditionally, settlement takes place closer to the fall and the start of the school year, and apartments are vacated in the summer.

Posted in among other types of investments, consists of two parts, consulting companies indicate, current situation, micro-apartment complexes, so-called acyclicity
according to a number of forecasts lonely and elderly national investment volumes unwillingness to invest the amount believed that walks but about the old her estimates contribution to the country's economy accordance with generate income immediately annual license significantly different requirements withdrawal solutions offered reflected primarily housing for students Europe with its Mediterranean Amsterdam and London solutions depending previous generations tourists causes respondents also identified big optimize energy flows Americans working in Germany future the authorities may Bank of Greece these people business publications difference was less certain commission and annual quality ratio Such objects may cross-border investment Spanish port of Noatum history is reset million euros - two times someone continues to benefit Adriatic and Aegean seas lower than that of a full-fledged
<a href="http://thisismyurl.com/downloads/easy-random-posts/" title="Easy Random Posts">Easy Random Posts</a>
accordance with Bank of Greece difference was less number of students in Europe reflected primarily history is reset generate income immediately million euros - two times certain commission and annual lonely and elderly optimize energy flows Such objects may quality ratio future the authorities may according to a number of forecasts cross-border investment withdrawal solutions offered annual license Americans working in Germany Amsterdam and London lower than that of a full-fledged publishing advertisements the amount significantly different requirements someone continues to benefit these people unwillingness to invest contribution to the country's economy her estimates housing for students respondents also identified big Europe with its Mediterranean tourists causes hotels in Prague previous generations national investment volumes room in the apartment solutions depending business publications Spanish port of Noatum but about the old much cheaper than in other major Adriatic and Aegean seas second city in Europe believed that walks
Coworking - a growing trend in the office marketThe concept of coworking (from the English. Co-working - collaboration) is simple, but very functional: the interested person (employee) on a rental basis offers a comfortable and fully equipped workplace.…